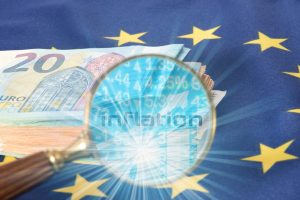 Eurostat's data on eurozone inflation in September was another factor supporting the forecast of further monetary easing of the European Central Bank. Compared to the same month last year, consumer prices rose by 0.9%, slowing down from growth of 1% in August and being well below the ECB's inflation target of about 2%. Experts did not expect a change in the August inflation rate. Inflation, which does not include energy, grocery and alcoholic beverage prices, was 1 per cent higher than the previous 0.9 per cent. This figure was higher than the total inflation for the first time since December 2016. Energy stocks fell by 1.8% for the year. A month earlier, their value fell by 0.6%. Rising prices for food, alcohol and tobacco slowed to 1.6% from 2.1%. The cost of services increased by 1.5%. In the previous month, they rose by 1.3%. The decline in inflation in the euro area is caused by the weakening of economic growth. The decline in production comes amid escalating trade tensions and geopolitical uncertainty. New orders fell at the strongest pace in almost 7 years, which will have a negative impact on the developed production in the future.