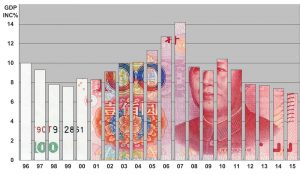 More than 1,200 Chinese companies have published their forecasts for financial performance for the 3rd quarter. Almost 44% of these companies expect the reporting to deteriorate. They are forecasting a decline in profits. And those companies that completed the first half of the year with a loss, expect it to increase. The continuing uncertainty over trade relations with the United States continues to put pressure on the Chinese economy. In the first half of the year, its growth rate slowed to 6.3%, and in the second quarter – to 6.2%. Data on the dynamics of China’s GDP in the 3rd quarter are to be published on Friday. Experts note that the trend of slowing in the Chinese economy is likely to continue in the first half of next year. The consequences of the trade conflict will continue to put pressure on the country’s economy and investment activity. Despite some progress in the Negotiations between the United States and China, there are still many outstanding issues.