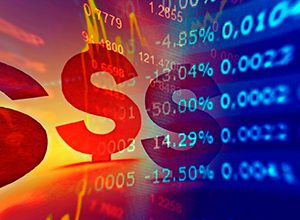 The quotes of the euro-dollar pair decreased at the end of the week to 1.1305, and during the trading the price fell below the local resistance of 1.1300.
The main reason for the sharp fall in the euro against the dollar was the weak reporting on the index of business activity in the manufacturing sector and the services sector of the Eurozone in December. In addition, the Bundesbank changed its forecasts for GDP and inflation in Germany downwards. The regulator now expects that the growth of the economy in the past year will be not 2.0%, as previously expected, but only 1.5%. The forecast for 2019 was also significantly lowered. Given that Germany is the main economy of the European Union, the market is extremely sensitive to its insufficiently strong macroeconomic indicators.
Traders also continued to play back the decision of the European Central Bank to end the quantitative easing program from January 1, 2019 and the statement of Mario Draghi, the head of the Central Bank, about the increased risks. An additional factor of pressure on the pair's quotations was the decrease in the region's economic growth forecasts for 2018-2019.
Against the background of the results of the meeting of the European Bank and depressing reporting, the words of Italian Prime Minister Giuseppe Conte that the final agreement on the Italian budget will be reached at the weekend, and a consensus on the deficit of 2.04% of GDP has already been found, led only to an intraday correction. It should be noted that the parties have never been so close to resolving the budget crisis, which can give the potential for the growth of the pair's quotations on Monday. The main contentious point is whether the European Commission will satisfy Rome's request not to include in the country's overall budget the costs of two national economic plans to ensure the security of the territory and reduce the time of consideration of civil and civil and criminal cases.
Today, the dynamics within the pair will be largely determined by the consumer price index in the Eurozone in November. According to analysts' expectations, the indicator should remain at the same level of 2.0%, but may pull the quotes down due to the fact that this value is the minimum of the last four months and shows a decrease in purchasing power in the region.
At Monday's trading, we consider the likely correctional growth of the pair's quotations against the background of positive news on the budget negotiations between Italy and the European Union to the resistance levels of 1.1330, 1.1355 and 1.1380.

Friday's trading was marked by a pullback of the quotes of the pound/dollar pair from the starting level of 1.2625 to 1.2575.
The downward trend continued against the background of the negative news context on Brexit. British Prime Minister Theresa May remains unsupported in Parliament. Opposition representatives called her attempts to get guarantees from THE EU member states regarding the country's exit from the European bloc as a complete failure of the UK's negotiating position. The pound reacts sharply to the lack of domestic political consensus. The situation is also exacerbated by the protests of the strikers who blocked Westminster Bridge in support of Brexit, as traders draw analogies between British protesters and protest demonstrations in France.
Statements by European leaders at the European Union summit also put significant pressure on the British currency. German Chancellor Angela Merkel and European Union Council President Donald Tusk have made it clear that the agreement on Britain's exit from the European Union will not be renegotiated. Merkel also noted the readiness for a tough Brexit scenario. Against the background of such rhetoric, traders' fears about the disappointing prospect of the UK leaving the EU without an agreement have significantly increased, and the sell-off of the pound has resumed.
On Friday, the growth of the US currency against the British was facilitated by the release of statistics on retail sales in the United States. Their volume in November increased to 0.2% with an expected increase of 0.1%, and the basic index of retail sales remained within expectations at the level of 0.2%. These indicators are an indicator of consumer confidence and give investors a certain share of optimism after the publication of the report on the slowdown in the US inflation rate in November.
We believe that in today's trading the quotes of the pound/dollar pair will maintain a downtrend in connection with the brexit news agenda and will be able to test the support levels of 1.2550, 1.2525 and 1.2490.

Last Friday was characterized by a slight decrease in the value of a troy ounce of gold to the level of 1243 dollars.
The value of the precious metal fell to two-week lows against the background of strong macroeconomic statistics of the United States, which contributed to the growth of the US currency. In turn, after the release of data on the growth of consumer spending and the acceleration of the pace of industrial production in the United States in November, the dollar reached its maximum value for 19 months. Other factors that stimulated the growth of the US currency due to the desire of investors to avoid risks were the fall of the euro due to weak reporting on the index of business activity in the Eurozone and the report on the economy of China, which was below forecasts.
Relative stabilization in the U.S.-China trade standoff also railed against gold. According to a statement from China's Finance Ministry on Friday, Beijing will suspend additional 25 percent tariffs on 144 U.S. exports and 5 percent on another 67 types of automotive goods for the period from January 1 to March 31.
In the long term, the gold rate may rise against the background of recession in the world's leading economies, germany and other eurozone states, as well as in China. However, at the moment it is not macroeconomic statistics, but primarily the dollar rate determines the dynamics of the precious metal. Gold, as a commodity, is traded mainly in the Us currency, and when its rate rises it becomes more expensive when making purchases in other currencies, which pushes their holders away from gold assets. So now, against the background of the upcoming meeting of the Federal Reserve this Wednesday with the expected analysts the probability of 75% on an increase in the interest rate, investors are in no hurry to invest in gold.
In our forecast for today we assume that gold quotes may fall to support levels of 1240, 1237 and 1235 dollars per troy ounce.

At the end of the week, the price of a barrel of WTI crude oil decreased from the level of 52.36 to 51.09 dollars. Thus, over the past week oil has fallen by about 2.7%.
The quotes show a pullback against the background of the fact that the market is still prevailing and even growing fears about the ineffectiveness of the OPEC deal, especially in the context of the slowdown in global economic growth and, as a result, the fall in the global demand for oil. Compounding the situation is the U.S.-China trade standoff, which also negatively affects the state of the world economy and energy demand.
In the longer term, however, there is reason for optimism. According to the report of the International Energy Agency, the reduction of investment in oil production can stimulate a sharp rise in commodity prices. The agency also believes that the decline in demand for oil as automotive fuel, which will occur in a few years, will still be compensated by the petrochemical industry and other modes of transportation.
The positive is added by the statement of the Saudi oil company Saudi Aramco that the volume of oil exports carried by Riyadh to the United States may be at the minimum level of 582,000 barrels per day in the last 30 19 19 years. Although the Saudis themselves explain this decision with the intention to follow the agreement within the framework of OPEC, it should be taken into account that it was made against the background of the draft resolution on the murder of journalist Jamal Khashoggi before the U.S. Senate. The project holds the Crown Prince of Saudi Arabia responsible for the murder of the journalist and must be approved by the U.S. Senate and House of Representatives and then approved by Donald Trump. It is likely that Riyadh seeks to protect itself from US pressure, but despite the true reasons, it can have a positive effect on commodity prices, as any fears about its deficit are played out by the market aside Increase.
According to Baker Hughes, released on Friday, the number of active drilling rigs for oil at the end of last week remained the same and is 877 units, which is a neutral factor for oil quotes.
Today we expect the downward trend for WTI crude oil and the movement of quotations to the levels of 50.85, 50.65, and 50.40 dollars per barrel.

On Friday, the market of virtual currencies again moved downwards. The price of Bitcoin fell to 3,230 dollars, during the weekend the benchmark cryptocurrency failed to recover above 3360 dollars. On Friday, Ethereum rolled back to the level of 85 dollars. XPR fell to $0.2860 on Friday and continued its decline over the weekend to 0.2800.
Ethereum was supported by the news that the Commodity Futures Trading Commission was probably considering launching Ethereum derivatives. The regulator wants to find out details about its work and technology, as well as about the business built on this platform. This is stated in a public request issued by the Commission, which has a 60-day deadline to respond. The request is mainly aimed at identifying the common and excellent characteristics of cryptocurrencies, as well as the opportunities, problems and risks associated with Ethereum. The interest of the regulator is a positive signal for the industry, especially given the potential sale of derivative financial instruments, recently actively bought up by institutional investors.
The head of the American fintech company Circle Jeremy Aller said that in his opinion, in three years Bitcoin will cost much more than now, and that he as an innstor prefers a long position. Aller believes that Bitcoin has potential as an alternative means of accumulation, and in the conditions of widespread tokenization on the market there will be even more tokens, which over time will represent all forms of financial assets in the world. He is convinced that the cryptocurrency industry requires clearer global regulation and delineation between the concepts of currency, securities and commodities, in which the United States has achieved significant success. Another important decision is to choose between the rules of circulation of digital securities on the secondary market or the organization of supervision as in the spot market of commodities.
In our forecast for Monday we expect the continuation of a moderate decline in virtual currencies. Bitcoin may fall to $3,230, $3,200 to $3,150. Support levels of $83, $80 and $75 are possible for Ethereum. XPR will also continue to decline to $.2800, 0.2760 and $.2720.
Jacenty Jaworski