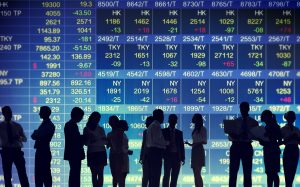 Chinese analysts will present information on imports, exports, as well as the aggregate
balance of the market according to these indicators. Deputy head of the Single Central Bank Luis de Guindos presents the latest data of the economy, as well as wait for the speech of the Vice-President of the British Central Bank on the stability of the financial sector, and a participant in the Monetary Regulator John Cunliffe's policies.

The Australian Central Bank will present data on the results of the meeting, which was held half a month ago. China will publish the consumer price index as well as price data in the manufacturing sector. Japan will present industrial production figures, and indicators on the activity of the services sector are also being prepared.
The production sector price policy index will be published in Switzerland. The United Kingdom prepares information on the labour market, namely, the level of unemployed, registered applications for financial support for unemployed citizens, and data on the average level of wages. Gertjan Vligi, a member of the Monetary Operations Committee, is expected to speak. Germany is preparing to present an index of business sector trends, as well as price indicators in the economic sector from the
Institute of zEW.American economists will publish data on retail sales from Redbook, as well as data on business sector activity Federal Reserve new York.

The price data on the consumer market will be presented by New ealand. Australia is preparing information from Westpac on the index of indicators of outperformance of the economy.
The Italian side will publish figures on production in the industrial sector. England prepares data on retail prices, as well as basic and initial price levels for representatives of production and consumption. The EU will publish information on the level of growth of consumer market inflation, as well as the balance in the market. Philip Lane, a member of the board of the Single Central Bank, will prepare to report on the work of the regulator.
Representatives of the U.S. economy present information on retail sales, as well as a review about the economic situation from the U.S. Federal Reserve under the name Beige Book. The indicators on prices on the housing market from NAHB will be released. Canada will present indicators on the rise in consumer prices. You should also expect a presentation from a member of the Committee on American Open Markets. The U.S. Petroleum Institute is preparing to publish information on the level of production in the United States as of the previous week.

Australian Federal Reserve Vice President Guy Debel will provide the public with the regulator's information. Australia is preparing to publish information about the labour market, namely the number of employed and part-time citizens. Swiss analysts are preparing to provide data o
n exports, imports and the overall balance of the market. The British side will publish information on retail volumes, as well as the next report from the British Central Bank on credit conditions. The European side will provide data on the numb
er of production facilities in the construction sector. secondary applications. In the U.S. will be released information on the volume of the manufacturing industry, and we should also expect indicators on business activity of the manufacturing sector in Philadelphia. The Canadian side will provide data on the amount of production provided, as well as information on the volume of employed citizens from ADP. The chairman of the Federal Reserve Bank John Williams, a member of the Board of the Federal Reserve Michel Bowman is expected to present. Data on the number of deposits of American natural gas is being prepared to publish the Energy Information Administration.

Japanese analysts are preparing to calculate data on consumer prices, as well as information on the deposits of the securities market, namely in the national and foreign equivalent. China will publish information on retail sales as well as manufacturing. China will present data on GDP growth for the third quarter of this year.
The German side presents the results of the calculation of the wholesale market price index, and the EU prepares a balance of calculations of the curre
nt situation in the market.Vice President of the Us Federal Reserve Richard Clarida together with the President of the Dallas The Federal Reserve Bank will report to the public with reports on the current situation. Also expect data from representatives of Baker Hughes about new volumes of drilling rigs in the reserves of the country as of the previous week.

MaxiMarkets has prepared a fresh forecast in the economic sector

Weak indicators are dragging the dollar down
Scroll to top