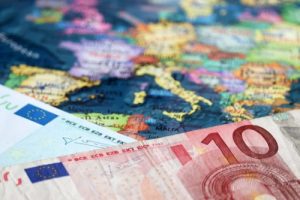 Yesterday was characterized by the fall of the euro paired with the dollar to the minimum value of 1.0920. This has not been observed for two years, since the quotes recorded a figure of 1.0908. This low level has taken a leading market position, although the euro still has every chance to fall lower.
One of the reasons for this downward spurt was the low performance of the EU and, in particular, Germany, on business activity. Brexit also contributes to the single currency. And there is also such a factor as mandatory payments from the American side for car buyers in Europe.
The dollar continues to rise rapidly, despite the U.S. government debt, which is projected to hit the currency worth $75 billion. The American currency is now in demand in the market, rates are rising by 10%. The Federal Reserve has even begun issuing repo loans for a one-day period. Analysts say the probability of buying assets by the System, which, in case of increased demand, will help to restore the market balance. Such an action will invariably lead to a decline in the dollar’s quotations.
Our forecast for today is the following: the increase in quotations for the euro/dollar at 1.0940, 1.0960, 1.0980.

Speaking about the level of quotations of the British currency to the dollar, you can see a decline to the level of 1.2340.
Following the court’s decision to resume the work of the British Parliament immediately, the legislators returned to their duties. There are hearings on Brexit, however, so far without significant changes. The question of Ireland’s border is still open. Europeans do not agree with the options of the decision of Prime Minister Boris Johnson. The opposition intends to continue the row on Brexit, and the Prime Minister, in turn, is confident of the date of completion of the agreement with the EU before the end of next month. However, political analysts predict that Johnson will appeal to the representatives of the Union about the request to delay Brexit. After all, according to the law, if the parties do not agree before October 19, he will have to talk about extending the term.
The UK consumption index is declining significantly, the last time it was seen six years ago. Brexit affects global sentiment and also scares off potential investors. Due to the lack of a single solution, the UK economy is falling. A slight easing of the downturn is possible in the third quarter.
Our forecast for the value of the pound against the dollar: falling to 1.2320, 1.2300, 1.2270.

Gold continues to grow: yesterday’s quotes reached 1507 dollars per troy ounce. After the previous fall, the level increased to 1535 dollars. Price limits reach 1500 – 1560 dollars.
The overall price growth reached 8%, and analysts predict a further recovery. For example, agriculture in India is recovering, it also played into the hands of the price of gold. Chinese currency exchanges have raised prices for futures and contracts. STOCKS of gold brand ETF are growing, causing demand among investors.
In China and India, gold sales fell as much as possible, higher prices and tariffs on Indian imports did not contribute to demand. According to analysts from UBS, sales have fallen to record lows, but in the near future interest is expected to resume. We need to give the market time to adapt to the new tariffs, and soon demand will return. According to forecasts, the next two years of investment gold will raise demand.
Forecast for the price of gold from us: rise to 1510, 1512, 1515 dollars per troy ounce.

Yesterday’s price for WTI oil remained unchanged: the indicators reached the level of 56.40 dollars per barrel. In the Chamber of Commerce, prices fell to $55.33. This amount is approaching normal since the attacks on oil bases.
The situation in Arabia continues to reduce production and supply in the Middle East. And according to the Energy Information Administration, U.S. production increased to 2.41 million barrels.
Also, thanks to a study by the Organization of Petroleum Exporting Countries, it was found that the supply of raw materials is slowly reaching its previous levels. But there are still questions about where the Saudis gained capacity: are these new productions or past deposits? Saudi Aramco’s IPO will be successful if the corporation returns its previous production volumes. Also, Mohammed Barkindo, the OPEC governor, says that the interest in the oil market will increase in the long term, everything will depend on how quickly Saudi Aramco exports recover.
Our current forecast for oil is: THE increase in the WTI brand to the figures of 56.60, 56.80, 57.00 dollars per barrel.

After the sharp fall of the cryptocurrency market, yesterday’s levels are still low. Bitcoin lost 3% in value, coming to the $8,100 mark. Ethereum fell to $165, as far as XRP was concerned, falling 24.25 cents. Total market capital is estimated at $214 billion.
For the first time in three months, bitcoin reached a low of $8,000. Alcoins were also affected, and Stablecoin Tether overtook Bitcoin cash to become the fourth in the market, with a mark of 4.16 billion dollars. The market collapse was caused, for the most part, by the fact that Bitcoin had too much demand. For example, the BitMEX platform got rid of long positions of $77 million.
Libra is now in a precarious situation: either it will help to normalize the market, or even more will shake it, – said the representative of the Central Bank of Europe Benoit Keret. The project is definitely good because it is possible to make payments without having to contact the bank. The new currency will accelerate international operations. But at the same time, steblicoin can negatively affect the entire financial system. The integrity of the monetary system may be at risk. The new cryptocurrency is also terrible because it can be in the hands of fraudsters: it is both terrorists and fraudsters in the financial market. We need to create a quality system of user protection.
Forecast from us for the cryptocurrency market: Bitcoin’s fall to 8050, 8000, 7900 dollars. Ethereum will drop to levels of $162, $160, $157. As for XRP, it will drop to 24.00, 23.70, 23.40 cents.

Japan is preparing to unveil a consumer price index as well as information on foreign and national investments.
British Nationwide has developed a property price index. France expects the consumer price index. Switzerland, in turn, will analyze the KOF index of indicators ahead of KOF. Michael Saunders, a spokesman for the Bank of England, will announce the latest data. The European Union will evaluate the new indicators of the index of business optimism for industry, as well as: the level of consumer confidence, the indicator of indicators of the service sector, the development of the economy, and the indicator of the business climate.
In America, there will be hearings about public consumption, analyze interest in durable goods. The University of Michigan will publish a consumer confidence index. Baker Hughes will assess the situation in the drilling sector of the United States: namely the number of active drilling rigs.