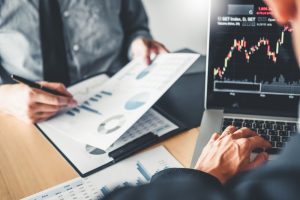 The previous trading week on the currency market in the euro/dollar count stopped at 1.1020. Despite the reduction in us rates and discussions from the Fed meeting, the euro/dollar rate does not change the range, leaving the quotes at the level of the side trend.

At the main meetings of the Central Banks of the Eurozone and the United States, it was decided to negotiate with the new participants in the trade conflict. For example, U.S. President Donald Trump said that despite some disagreements, he hopes to come to an agreement with China. Tellingly, Trump's advisers say the opposite. Larry Kudrow is optimistic: he is confident that the parties are positioned for a compromise solution. Michael Pillsbury, in his side, talks about the introduction of new tariffs for the Celestial Empire. The fact that the October talks between the countries will be successful also suggests that twice in a month there have been delays in the increase in duties.

According to the forecast of the Federal Reserve Bank of New York, the U.S. economy in the third quarter of this year grew to 2.2% (compared to last week the figure was 1.6%). In compiling the forecast, the Federal Reserve Bank took into account the improvement of the data of industrial production, housing sector and production capacity. U.S. GDP growth is expected to increase for the fourth quarter. Since November, the forecasts are set to increase the money supply of the euro currency. Europe's economy is weakening, and this is particularly evident in the current state of Germany. These two factors suggest that the euro/dollar pair will not recover any time soon.

At the end of last week, the trading market of the pound against the dollar lowered the rate to 1.2469. The UK and the European Union made agreements, and immediately quotes noted the growth of currencies. European Commission President Jean-Claude Juncker, speaking about Brexit, said that he sent documents on the situation of the European Union under the new treaty to British Prime Minister Boris Johnson. He is likely to ask for a new reprieve after the scheduled release date of October 31. That is, in just a month Johnson, based on the new law, will be obliged to ask for a reprieve.

Since the first numbers of September, the growth of the pound to the dollar has been recorded. It all depends on the progress of the agreement, as well as possible solutions in the negotiation process. If the positive trend is maintained, the pound against the dollar may reach the mark of 1.2580. Until the start of the process of the United Kingdom's exit from the European Union, the range of quotations will remain at the level of 1.2400 – 1.2580.

In connection with the bombing of oil facilities in Saudi Arabia, the U.S. government imposes sanctions against the Bank of Iran. Tellingly, the Iranian authorities deny any role in the incident that occurred last week.

The Fed has already cut interest rates twice this year, while there have been no announcements yet. Prospects are not rosy, and there are favorable options for the gold market: world central banks soften monetary policy. U.S. trade talks with China are expected at the beginning of October.

The Central Bank of Russia in August replenished the gold reserve, making the purchase of 400,000 ounces of gold. By the way, Russia does not lag behind the advanced Italy and France: the country ranks fifth in terms of the volume of gold reserves. At this rate of procurement, the Russian regulator will surpass the Central Banks of the leading European countries in a year and a half. Although, there is evidence of a decrease in the rate of replenishment of the country's gold reserves. For example, in 2019 it is planned to add 180 tons of stock, which is less than in the last three years. If we talk about gold mining, then Russia is trying to become a leader: there is an ambitious goal to leave behind Australia and China. Over the current year, there is a tendency to increase the replenishment of gold reserves by different countries. This demand is expected to only increase in the near future.

WTI crude oil decreased in price to $58.38 per barrel by the end of last week. The quotations are likely to continue to decline this week.

According to the Saudi Ministry of Foreign Affairs, the investigation into the attack on oil facilities revealed that Iranian weapons were involved in the attack. Also, the Saudi government has already confirmed that it is ready to strike back at any moment if necessary. In turn, the Iranian side again denies any involvement in the incident. And the country's armed organizations have declared an active rebuff to any attack that will be applied to the territory of Iran.

Prospects are waning, from countries with not yet formed markets, to advanced developed countries. This is stated by the Organization for Economic Cooperation. The authorities need to take measures to grow the economy, otherwise, apart from stagnation at a low level, the economy can start to fall rapidly downwards. The trade war between China and the United States as one of the main reasons for the decline in the level. This includes lower levels of investment, big risks in financial markets, and increased policy uncertainty. This year recorded the lowest level of growth in world GDP. The OECD is 2.9% weaker than it was during the 2008 financial crisis. A big role in easing the economy in the deadline for Britain's exit from the EU. Brexit has also had an impact on investment.

At the beginning of the new week, it is planned to launch trading on the Bakkt platform with daily and monthly Bitcoin futures. This will help Bitcoin to increase volatility: recently, its trades are at a low range. Futures contracts in the main cryptocurrency and the location of the New York Stock Exchange increase the interest of institutional market participants with significant capital. Although, in general, the share of skepticism and distrust in the cryptocurrency market is still observed.

David Marcus, founder of Calibra on Facebook, announces that the project is thinking about launching its own cryptocurrency in 2020. It remains only to close some regulatory nuances. The founder also says that Libra does not pose any threats to the monetary policy of the states. This is despite the fact that the French and German authorities have recently criticized the system. David Marcus does not deny the possible problems that their cryptocurrency may face immediately after the introduction. Still, it should take time to properly convey the concept and rules of use to the end consumer.

Australia will present a PMI rating in the services and manufacturing sectors.

The Eurozone, in particular France and Germany, will publish business indicators in the manufacturing sector. The German Bundesbank will make a presentation of the report.

Weak indicators are dragging the dollar down Economic statistics for Banker 30.09-04.10 – Forex
Scroll to top