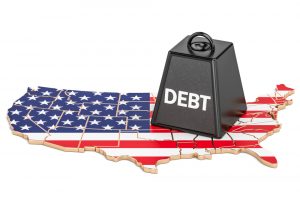 The Congressional Budget Office released data showing that in the 11 months of the fiscal year ending in September, the country's state budget deficit was $1 trillion to $70 billion. Its growth compared to the year before was 168 billion dollars. The expendable part increased by 7%. Health insurance costs rose 6 percent in Medicare and 5 percent in Medicaid. Social insurance was spent 6% more than a year earlier. Defence spending increased by 8%. Interest payments on the national debt increased by 14%. At the same time, the growth rate of budget revenues slowed to 3%. Tax collections increased by only 1% and corporate tax increases amounted to 5%. Experts expect a traditional increase in budget revenues in September, exceeding expenditures. This will help reduce the deficit below $1 trillion. The deficit is expected to be $960 billion at the end of the fiscal year.