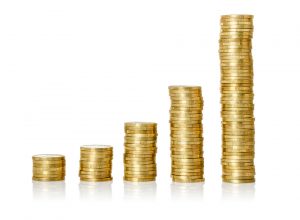 The euro/dollar pair has transformed into a corrective stage of growth after falling to a new low in May 2017. The quotation strengthened last week by almost 100 points with resistance of 1.0975. The recovery of the pair was not influenced by America's strong macroeconomic statistics. The dollar fell after falling trade in the U.S. industrial sector, hitting a low of 47.8 points over the past 10 years. A figure below 50 means a downturn in the industry; this decline in the index triggered a strong market reaction. The indicator of business activity in the service sector also appeared below expectations, but until today is above 50. U.S. labor market performance last month was mixed. The unemployment index fell to 3.5% from 3.7% in August, which was only in 1969. The number of new jobs increased by 136,000, less than expected.

Delays in recruitment and production cuts will result in the Fed's interest rate cut by the end of October. The situation with bonds in the market is now the case that economists estimate the possibility of falling by 87% from 40% since the beginning of the week. Last week, Federal Reserve Vice President Richard Clarid issued a statement saying that global difficulties are affecting the U.S. economy and that the Fed intends to act in accordance with the situation. The market sees this as a clear signal for the rate adjustment.

Disappointing data came from the Eurozone last week. Activity in manufacturing and services in Germany and the euro area fell again. The region's economic performance is close to recession. The U.S. wants to impose tariffs on aircraft manufactured in Europe, agricultural products and other goods from October 18. All this may be possible thanks to the recession in Germany, where the manufacturing sector has very much slowed down. Preliminary indicators on inflation in the euro area for September show a drop in consumer prices to 0.9%.

Despite the weak growth rates, the euro began to recover against the dollar. From 2019, the quote developed according to the following model: when it falls slightly below the previous minimum value and then recovers before the autumn. Today's correction is possible with the continuation of the high resistance level of about 1.1030. Interest rate cuts in the United States may continue to support upward momentum in the short term. In the future, we should expect the euro to depreciate against the dollar, as fundamental factors indicate that the downward trend will continue in the long term.

The pound strengthened against the US dollar after it was marked by a decrease of almost 300 points to the level of 1.2204. Prices recovered to 1.2330 due to weak statistics of US macroeconomic indicators.

Now the pair can trade with low volatility, waiting for the final situation on Brexit, until the end of which is less than a month. The European Parliament has not accepted the British government's recommendations on Brexit. EU officials have deemed Prime Minister Boris Johnson's version of the Brexit deal unreliable and extended the possibility of changing it for another week. If it fails, EU leaders will refuse to discuss the Brexit decision at the October summit. Such an ultimatum, together with the EU's principled comments on its proposal for an Irish border, would mean Johnson may not reach an agreement by October 31.

A week later, the British government confirmed that the Prime Minister would ask the European Union to trigger Brexit if it did not find a case for Brussels. At the same time, Boris Johnson has repeatedly stated that he does not want to postpone the date of Brexit. Irish Prime Minister Leo Varadkar has already said that the country's leadership may consider a decision to postpone the deadline. No one doubts that other EU leaders will also be willing to give Britain more time, so delaying Brexit until 2020 seems the most likely solution today. The situation can have a positive impact on the British currency, as the postponement increases the chances of confirming the agreement.

At the same time, the period of high level of uncertainty associated with Brexit will last more than one month, which may negatively affect some indicators of the British economy. Economic activity in construction and services fell again in September. Activity in the manufacturing sector increased slightly, but is still below the peak level of 50, which indicates a slowdown in the industry. The increase in consumer prices decreased, and corporate investments remained at the lowest level.

If negotiations with the EU continue, it will further reduce consumer and business activity. GDP growth in 3 or 4 quarters will be close to zero or fall again. As a result, the British currency will be difficult to recover, because it is limited by negative economic indicators. It is possible that growth will be corrected to local maximums of 1.2580. The lowest threshold is virtually unlimited. If the version of a hard Brexit is high, prices could fall sharply between 1.1000 – 1.1500.